Hyundai ranked fourth among all brands in the J.D. Power 2015 U.S. Initial Quality StudySM (IQS) and second among non-premium automakers. In addition, the 2015 Hyundai Tucson (named ix35 in Europe) was awarded for the highest initial quality in the small SUV segment and the 2015 Hyundai Accent earned the highest honor in the small-car segment for the second year in a row.

“Hyundai is committed to delivering its owners exceptional quality vehicles,” said Frank Ferrara, executive vice president, customer satisfaction, Hyundai Motor America. “Not only do we take the improvement of quality on our existing models seriously, but we must also launch new vehicles with the highest quality right out of the gate. It is important for our customers to be happy with their vehicles, and that starts with quality and educating them on how to use all the features of their vehicle. Results like these demonstrate how well we’re succeeding in connecting with our customers on all levels.”

IQS, now in its 29th year, serves as the industry benchmark for new-vehicle quality measured at 90 days of ownership. According to the study, Tucson and Accent owners reported fewer problems with their vehicles than any other small SUV or small car, respectively.

“Small SUVs and small cars are some of the most popular vehicles on the road today and nearly every automaker has products that compete in these segments, giving consumers many options to choose from,” said Mircea Gradu, executive director, engineering and quality, Hyundai Motor America. “Both the Accent and Tucson were ranked highest in their crowded segments for high quality, which provides owners peace of mind when it comes to an important financial purchase.”

In total, Hyundai had four models ranking in the top two in their segments, including segment awards for Tucson and Accent, and second-place finishes for Elantra and Santa Fe. The Hyundai overall score was 95 problems per 100 vehicles, 17 problems fewer than the industry average.

This year’s results mark the fourth time Hyundai has finished among the top four brands overall. The 2015 IQS is based on responses from more than 84,000 purchasers and lessees of new 2015 model-year vehicles surveyed after 90 days of ownership. The study is based on a 233-question survey designed to provide manufacturers with information to facilitate the identification of problems and drive product improvement. 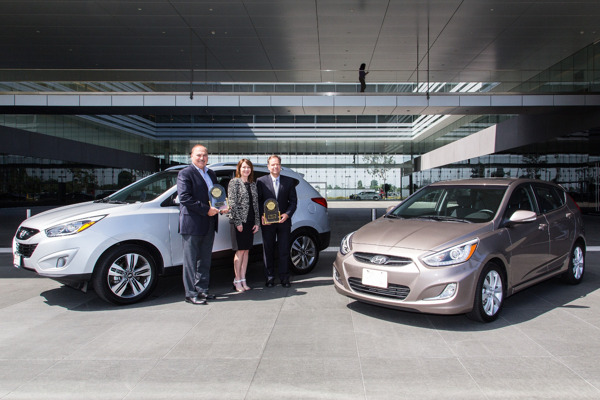